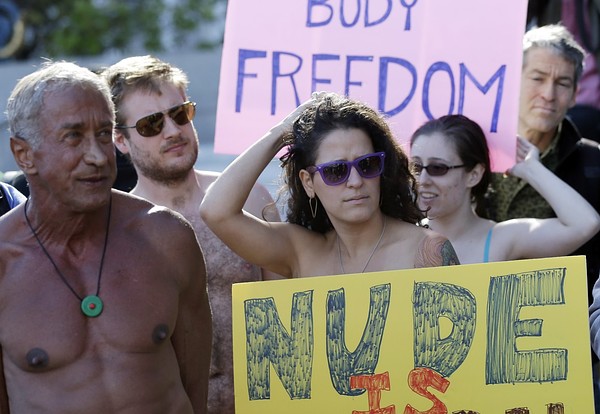 http://nymag.com/daily/intelligencer/2014/03/castro-san-franciscos-public-nudity-ban.html Self expression comes in many different forms. Our laws protect self expression by giving us freedom of speech and freedom of religion. However, there are many instances where we aren’t quite sure how we feel about how people choose to express themselves. In San Francisco, the “body freedom” movement is a real thing. Most places, people have no interest in being publicly nude. However, San Francisco needs to be special and it’s not uncommon to see groups of naked people clustered on street corners hanging out completely nude. Last year, San Francisco officials passed an ordinance banning public nudity, mostly. Nudity is still allowed for children under 5 and at major street fairs, interestingly enough considering the massive number of people who attend these events and would witness the nudity. This was not taken well by nudity lovers, and has not decreased public nudity in San Francisco at all really. Now, the naked people write messages on their bodies and dance around to protest the ban as a means of expressing themselves. Their naked body is their way of sending a message. While most San Franciscans are used to this, and could care less about naked people on the streets, the ordinance was passed for a reason. Not everyone feels comfortable with the nudity and feels it is obscene and should be illegal. For some, nudity is an artful form of expression and to others it is an obscene violation. What causes the differing opinions on public nudity and where should the line be drawn between self expression and public obscenity? Should public nudity be permitted under the blanket of freedom of speech, or is “body freedom” taking it a bit too far?

Mirror Mirror On The Wall. Surprise! Its a Vagina

Is body paint considered as clothing?

The Naked, The Nude, and the Mirrored Box

The Mission District aka The Latin Ghetto by Alberto Martinez