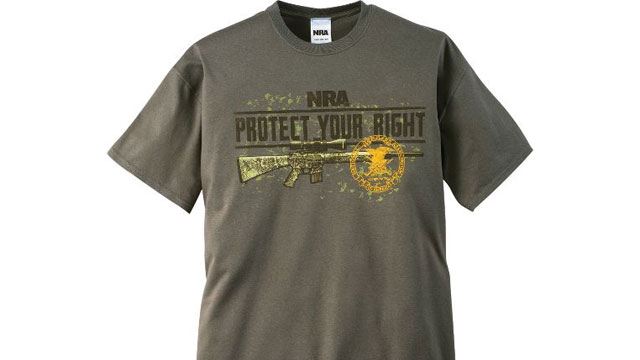 In the image above depicts the National Rifle Association’s logo with a hunting rifle and the phrase, “Protect your Right.” This shirt was worn by a 14 year old teenager named Jared Marcum from West Virginia. His teacher confronted him about the shirt he was wearing believing that it went against the school dress code. Logan county schools’ dress code “prohibits clothing and accessories that display profanity, violence, discriminatory messages or sexual language, along with ads for alcohol, tobacco or drugs. There is no mention of the NRA or guns.” His teacher, unnamed, told him to take off the shirt or wear it inside out. Marcum refused. Marcum believed that there was nothing wrong with him expressing his feelings and for what he believed in, while the teacher thought otherwise. Apparently, the teacher started to raise his voice and at the same time gathering an audience. Soon after, Marcum was arrested for “disrupting the school process” according to ABC News that was soon referred to as the almost beginnings of a school riot. However, Marcum states that it was the teacher who caused the debacle and he had videos to prove it. Although, no one has heard anything from the teacher, since it is was not allowed, all we know is that the start to Marcum’s bad day was when the teacher believed his shirt was inappropriate. However, was Marcum really in the wrong to be wearing that shirt that had a gun on it, although it was not explicitly stated in the dress code? Was he in the wrong because he wanted to express his opinions of protecting his rights. Was it right for him to be arrested?

Awareness Through Art? Or Deviant Defacement?

A Visual Message About Gun Control